Happy weekend to everyone and to those in the US I hope you enjoy the long 3 day weekend.

Personal Update: About six months ago I committed to making quality of life changes in my life and I've been working on executing that plan. One big goal & accomplishment was finding a new job that was personally fulfilling and less stress. I made that change about 6 weeks ago and I could not be happier. It took awhile but I've found a role that I genuinely enjoy and I'm working with some great people.

Another quality of life change that I've committed to is giving myself options in my life. I'm working with a great team of people from Primerica and I've been working on my state life insurance exam and passed this morning! Next will be the series 66. If I can learn a new skillset and help others as a result, then this is a worthwhile endeavor.

For me, two of the most important things in life are 1) giving myself options into the future and 2) never feeling stuck. You can always make a plan for change but you have to commit to that change. Sometimes it's difficult and takes some time, but you have to stay committed. I'm proud because I set these goals into place ~6 months ago and now I'm seeing the fruit of that effort.

Weekly Performance:  Overall while the portfolio was down 85bps, the defensive nature of the portfolio helped ensure we were less worse than the major indexes (S&P 298 bps, DJIA 273bps & Nasdaq 343bps).  While I'd love to be net positive, the majority of the portfolio is invested in IRAs so I'm limited by the amount of short selling that I can do.

In retrospect, buying longer term January puts (XLK, XLF) as a hedge in June was the most inopportune time given the bear market rally. While still quite underwater, those puts are still in play and helped to cushion the losses this week. The puts were purchased to setup the Q3 portfolio and I think I was a quarter early. Most of the data I see still points to margin & EPS compression and with the Fed committed to consistently raising rates, we'll start to see the impact work it's way through the system.
This week I've also sold off a fair amount of my positions. While there's a month to go before I rebalance for Q4, I'm not comfortable given the macro environment for the remainder of Q3 so I'll sit on cash. Could we go into another bear market rally?  Sure, but I'm more comfortable playing puts from the top instead of holding from the bottom if the longer term trend is pointing toward pain.
For some holdings ($O, $MRK, $KO, $JNJ) I've sold some deeper in the money covered calls essentially selling at a premium a few months from now. This allows me to keep collecting dividends on the underlying holdings while conditions start to play out for Q3 results.
For example with JNJ, I sold a $155 October 21st call for $1,066, essentially selling it for $165.66 in October. If it drops below $155 by October, then I've covered the downside. If the stock is between $155-$165, then I'll profit by selling at a premium.  If it's over $165 then I'll be forced to sell at $165 and miss out on potential upside.  Given where I think the general market is going, I'm comfortable making some of these bets and keeping the premiums.
If you look on the portfolio page, you'll see current holdings are heavily centered around $UUP (dollar), utilities stocks and funds and covered call funds like $XYLD & $JEPI. Given the current shakiness in the market, the covered call funds should do quite well for producing monthly income.
Portfolio beta will continue to stay VERY low given the overall global environment. I'm not trying to time the bottom but I am looking into the future and I think it won't pay to be risky now. 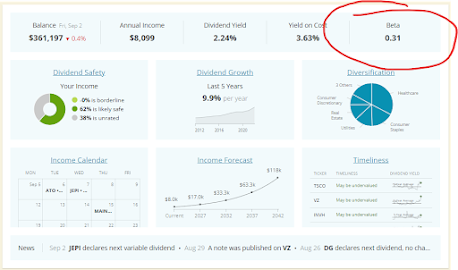 Dividends collected:  We've crossed the $7,300 amount which is great. A big week collecting $336. Even though 40% of the portfolio is in cash, we're still pulling down some healthy income while keeping that beta low in quality healthcare and utility stocks.  As I redo the portfolio for Q4, the focus should remain pretty similar: Low beta, high quality, strong FCF stocks.

Options Activity: I spoke about some of the covered call plays above. Most of the underwater options are expiring in January (XLK, XLY).  I also have a big Carvana bear put spread that is with $1.3K of approaching cost that I setup in June. Unfortunately I had to close some big bear put spreads on Coinbase and some September puts that will be out of the money.
Since I'm limited on shorting directly I hedged using puts at the beginning of Q3 and I'm afraid the bear market rally wiped out the shorter term puts. I think I'm right regarding the direction but off on my timing so I'll continue to be focused on shoring up my game in that area.
I do love covered calls but since we're a large majority in cash I may attempt to collect premiums in Q3/Q4 via Bear Put Spreads on 'safer' dividend stocks I know when implied volatility rises.
Have a great weekend everyone!  Stay safe out there.
at September 03, 2022 No comments: